Czech mates get the call 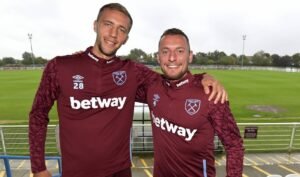 The most unsurprising news of the day has just broken.

And it reveals that Tomas Soucek and Vlad Coufal have both been called up for the Czech Republic.

Both are in the 26 man squad  for the upcoming FIFA World Cup qualification matches which  sees them involved on Wednesday 24 March when they face Estonia in Tallinn, before heading back to Prague to face Belgium, the team sitting No1 in the FIFA rankings, three days later.

The international window concludes with an assignment at the Cardiff City Stadium to face Wales on Tuesday 30 March.

Souček will hope to add to the four goals he has in 29 senior caps to date, while Coufal has one goal from his 12 Czech Republic outings.

Gareth Southgate is due to name his squad tomorrow (Thurs) when Declan Rice looking a ce certain inclusion of course and  – as reported earlier – with Jesse Lingard a possible squad member for the first time since 2019.