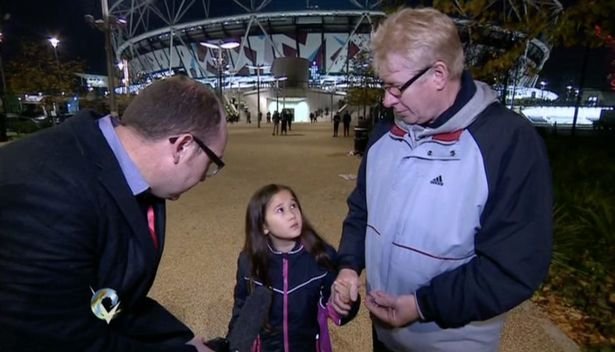 A Chelsea fan – clearly keen to have his five minutes of fame before the BBC cameras – waded into Hammers supporters after the over-hyped incidents in the Trevor Brooking Stand last night.

With daughter Victoria,8, he spoke of their terrible ordeal by coins – and how many times she had been hit by them.

He said:  “It was the West Ham fans, you could clearly see them throwing them.”

But Victoria wasn’t so sure about where they had come from saying: “We couldn’t see really who was throwing them.”

Dad – who remained nameless – said: [She’s] “been going since she’s two. She’s never experienced violence like this before or the aggression that we’ve had to suffer. We’ve never been hit by coins before, to be hit by seven of them in one evening, that’s why we’ve kept them. We want to take this matter further.”

I have just one problem with all of that. How on earth could a father – aware of the early publicity about a game that was expected to have some issues at some point – expose a eight year old to obvious perils.

And come to that why didn’t the BBC ask him? Not the best balanced but certainly one of the most cowardly interviews we’ve seen.

Par for the course in “Get West Ham season”