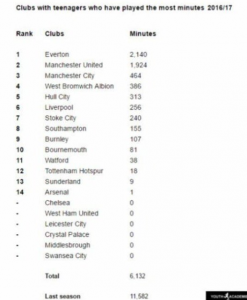 West Ham Chairman David Gold has raised his doubts of a breakthrough into the Premier League first team for the Hammer’s latest crop of teenagers from the Academy.

Replying to the news that Reece Oxford, Reece Burke and Domingos Quina will most likely go out on loan again next season Gold admitted: “I think we all have to (accept) that it is extremely unlikely that a teenager will break into a P(remier) L(eague) team full of seasoned international(s). dg”

West Ham is one of six Premier League clubs not to have played a teenager in the league this season.  West Ham, Chelsea, Leicester City, Swansea, Crystal Palace and Middlesbrough didn’t field a teenager in action this season while Everton topped the table with 2,140 minutes played by teenagers with Manchester United a close second with 1,924 minutes played.

Adding:“Sam (Allardyce) played the teenagers at Nottingham Forest and we got beat 5-0. dg”

Slaven Bilic has indicated that 18-year-old Declan Rice will play some part of West Ham’s game on Sunday recording the first minutes of a teenager in the first team this season.