Dec: “It’s my last game with Nobes and it’s horrible” 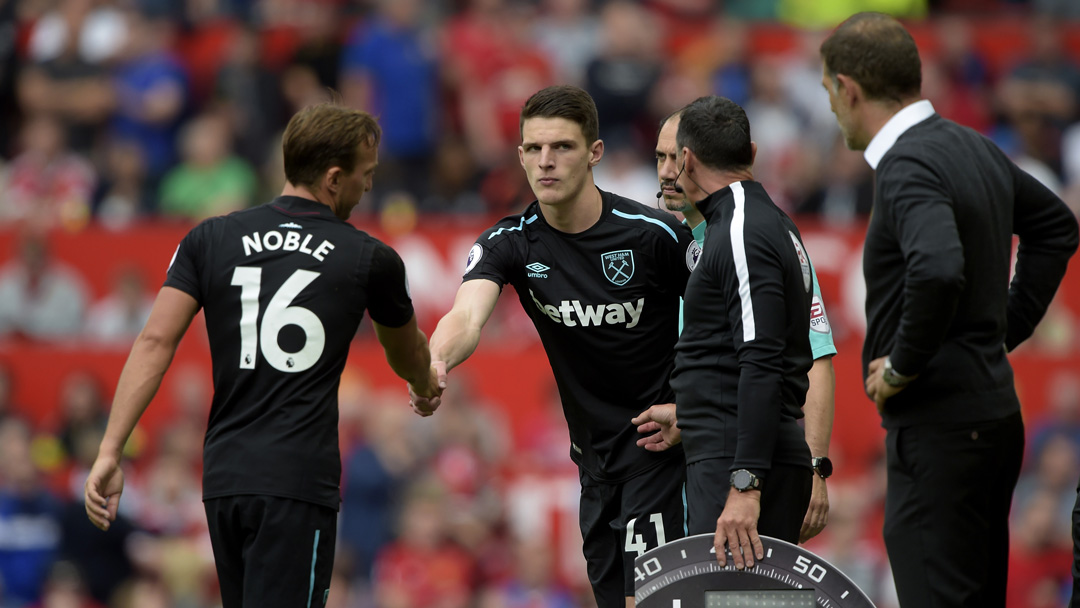 It’s as difficult to describe the relationship between Declan and Nobes as it is for the new captain to explain how much he thinks about the retiring No 16.

In a week of non stop tributes to the retiring 35 year old there is none more fitting than Declan’s as we go into the final match of a near landmark season.

It’s probably too much to expect Dec to follow in Mark’s footsteps by staying at the club throughout his career. These are different days with the amount of money floating around football.

But we are allowed to dream!

It is nine years the pair first met with Dec a 14-year-old schoolboy, while Nobes was already a West Ham United star and an established Premier League midfielder.

As he has done throughout his career at his boyhood club, Noble took a keen interest in the young Rice, encouraging him, mentoring him and guiding him.

The teenager took the advice on board, eager to follow in Noble’s footsteps into the first team – job done.

And in a heartfelt tribute on www.whufc.com the 23 year old said: “When I first met him, it was kind of like how he is with the Academy now, when he pops over to Chadwell, does his little bits and bobs, comes over and speaks with the coaching staff and speaks to the players.

And at that time, you’re like, looking at all the first-team players really, and obviously Nobes was the main man, so you’re looking up at him and thinking ‘That’s Mark Noble!’.

He was always one that would always come and speak to me, because I’m quite an outgoing person and a bubbly personality, so we always got on from the start. So, from the start, I can’t even explain it, he’s just the absolute best.”

“He’s the man. He’s the one that everyone goes to if you’ve got a problem. He’s someone that you can trust, someone who is reliable. If you ask him for a favour, he will make sure that he tries to do his best to do it.

“Even when lads come in from other countries, it shouldn’t even be his job to be trying to help them out, but he’s helping them out, trying to sort things with their houses if they need anything. I think he’s just so much more behind the scenes that people don’t see.”

“Do you know what? I can remember my first tour with West Ham, I was 16 and we went to Seattle. I wasn’t going to go as I was on standby, but I literally got in because James Tomkins was sold that summer.

“I was then called into the squad and flew out on my own. I remember getting to the training ground late in Seattle and Nobes, Andy [Carroll] and Cress were walking out and I was walking in.

“Nobes knew me but didn’t really know me, if you know what I mean, but he said ‘Alright son!’ and clapped me on the back and we shook hands and that. I was looking up at them and thinking ‘This is mental!’ as it was when I was first with the first team.

“I feel like you always need someone that you can speak to about anything, especially as a captain anyway, and obviously we’ve got, in my opinion, the best one in the country.

“He’s just given me pointers on the training pitch, just small things football things like where if I don’t pass the ball to him in a certain position where then he can play like one touch, he was pulling me on it and said ‘Pass the ball my right foot so I can do that quicker’. Just things like that I’m always learning with him.

“And then obviously as we’ve got older and he’s seen me progress, he’s kind of just turned into like a proud Dad and obviously for him to see my growth and seen me come through from ‘Little Dec’ to what I am now, I know proud he is and he tells me that every day. It’s special.”

On taking over the captaincy from him Dec added: “Some people might have might get the hump and wouldn’t be happy with not playing or captaining the team anymore, but he’s genuinely deep down proud and I know he’s happy proud of me as well because of what I’m doing.

“ I feel like you can’t really explain what a character he is like until you’ve actually met him and know him deeply well.

“It’s sad, I was at home and I was just thinking about like, this is his last ever season and next season we’re not going to be there.

“I was thinking there will be a point in the season when it’ll be my last training session, there’ll be a point when it’s my last game with him, and it’s horrible.”