Declan aiming to skip into Europa round of 16

Declan Rice – having revealed in his last interview that he is happier at West Ham and more settled than hee has ever been – is expecting the fans to turn on the style when Rapid Vienna come vising tonight.

Dec scored another first when finding the net in our opening game at Dinamo Zagreb and sounds like a man very much wanting to be involved again.

A vociferous crowd and massive Claret and Blue backing is expected for the first European night under the lights – as proved the case one thousand miles away in Croatia two weeks ago.

Declan’s rise to fame and series of achievements has been so intense that we will now be hoping and praying he can add another by leading the Hammers to a Europa Cup Final victory.

It seems likely that he will be involved this evening probably with Alex Kral alongside as the boss perhaps choosing to give Tomas another rest.

And speaking on the official site he said: “It’s only really started to hit me now how special that night was in Zagreb,” the England midfielder said, speaking at his pre-match press conference.

“We were in a European competition, for me and a lot of players for the first time, and it was just special. To get the win, to score and to have the fans there to celebrate with us was a really big achievement.

“But it means nothing if we don’t go out there on Thursday night, in front of our fans, and get three points, which would see us start off with six from six. We really want to top this group and that’s the objective.”

The official site initially claimed we went straight into  should the Hammers progress as winners of Group H, they would skip  the competition’s Round of 16 and go straight into the quarter-finals, to be played in March 2022. In fact that’s not the case and we will go INTO the 16. They have since changed their error.

“I had that experience in the summer of playing international European football [for England] and I learned so much from that,” he confirmed. “To play my first game in Europe for West Ham was really special as well.

“I want to keep playing in Europe and pushing myself to get better. I think you’ll learn a lot, more as the games come on and we play different opposition.

“You’ll learn from different styles and different players you get to come up against to those in the Premier League. I think there’s definitely a lot to learn.” 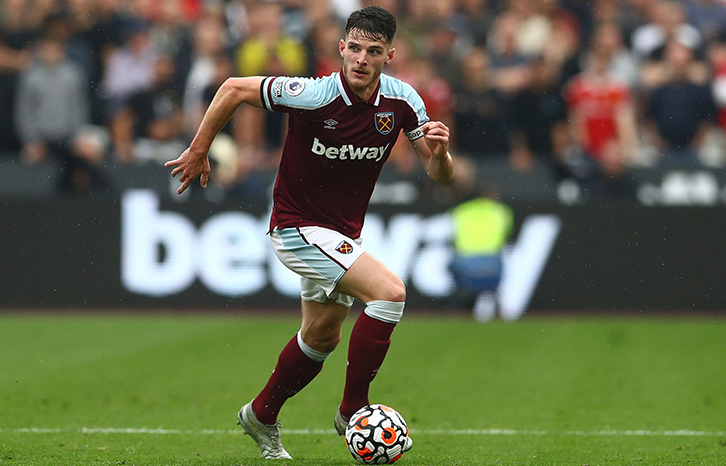 Rice also reiterated that spirits are high at West Ham after the outstanding successes achieved in 2020/21 and the strong start to the new campaign.

He explained: “I’ve played in teams here that have fought relegation and been mid-table, but in the last two seasons, what the manager has built for us, and what we’ve bought into as players, has been amazing.

“It’s like a big family. I think the gaffer said it before, we’re all like a bunch of kids. Honestly, it’s such a great place to be around at the moment. With the results and how well we’re doing, that makes it that bit more special.”