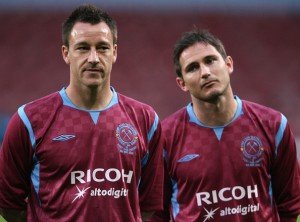 Declan Rice has revealed that former Chelsea defender John Terry has helped mentor him since he was released from Chelsea and he often meets up with him in Surrey where they both live.

Rice told the Sun Newspaper “Me and John Terry are really good friends. When I got released from Chelsea, he gave me a call, we spoke for about 45 minutes. I told him I was going to West Ham. He’d been there and he was my idol growing up. To ask him a load of questions, and for him to answer them, I’ll always remember the stuff he said.

“We live locally to each other. He’s at Villa but when he’s back down, we meet up. We met the other week and we had a catch-up. It was good. To have him there, he’s always going to help me and pass on his experiences.”

One comment on “Declan Rice: John Terry is my mentor”