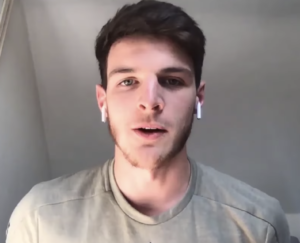 Hammer Delcan Rice appeared on Soccer Am over the weekend with John Fendley (Fenders) and Jimmy Bullard.

The Soccer AM hosts took delight in making fun of his unkempt look. Rice talked about his love for his best friend Mason Mount despite the pranks while he also talks about the massive disappointment when Chelsea released him 14 years of age at the start of career only to be offered another chance with Fulham or West Ham. He explained he chose West Ham which started a whole new chapter in his life, he says he was driven from a young age to succeed to become a professional footballer and nothing was going to get in his way,

He explained he sacrificed a lot and moved away from home and move into digs to achieve to drive himself to become the best he could possibly be,

Watch the Sky Soccer AM clip below:

← When the Irons last played behind closed doors -what was once used as a punishment is being presented as TV pleasure
Video: Lasagne-gate remembered →
Click Here for Comments >

One comment on “Declan Rice shares stories from lockdown”