Posted by Sean Whetstone on March 13, 2019 in News, Whispers 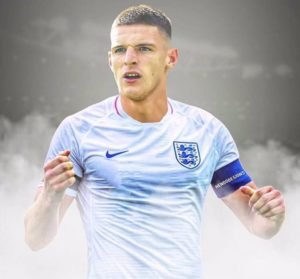 It is the biggest non-secret in football. Hammer Declan Rice will today be announced by Gareth Southgate in the England senior squad that will play Czech Republic and Montenego in late March. His registration as an England player was confirmed by FIFA last week. The game’s ruling body approved the paperwork for the Hammers star to switch his international allegiance from Ireland to England.

The announcement comes less than twenty-four hours after young Rice was named as Ireland’s young player of the year which was either Ireland FA’s attempt at humour, designed to embarrass Rice or a massive administrative mistake.  Either way, un-surprisingly Declan will not be in Dublin at the ceremony to collect the award on Sunday.

Declan will finally be rewarded today for switching countries after the England camp courted him for some time.

Well done Declan and good luck in your England career from everyone at Claret and Hugh.

2 comments on “Declan set for England call up today”