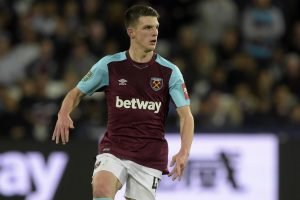 Declan Rice has quickly described his feelings after the error of judgement between himself and Joe Hart which handed Arsenal a soft goal.

The 19 year old had been in impressive form again until a fatal error which handed the Gunners their second goal as they led again after seeing an early goal equalised by Arnie.

Nobody needs to tell the teenager  of the error or labour it because he is very aware that it was down to him rather than Joe Hart as he allowed the ball to pass over him believing the stopper had it covered.

And after the game he to to Twitter explaining his thoughts on a boob which left him in anguish.

I’m young.. I’ll make mistakes.. it’s all a leaning process to get to the top. thank you too the fans again who were brilliant

ready to bounce back next week.