Declan Rice has warned the Three Lions will need to up their performance against the Czech Republic in tomorrow night’s Euro clash.

The match will give Irons fans a fascinating opportunity of making a comparison between the Hammers captain – in Mark noble’s absence – and his midfield partner Tomas Soucek.

But one thing is for sure a much better performance than that against Scotland will be required if England are to get a victory over a very good team!

As things stand England need a point from the game  to secure second place in the group and a round of 16 against the Group E runners-up – Sweden, Slovakia, Spain or Poland.

England were ok against the Croatians but have managed just ione goal in two games with captain Harry Kane looking way off colour and Declan himself playing a sideways and backwards passing game against the Scots.

And commenting at uefa.com on what will be required Declan said: “I think these are games where we’re at home and we should be winning and we as players know that, but credit to Scotland,”

“We need to improve, we need to keep trying to get better and analyse it and obviously the Czech Republic game on Tuesday is massive. 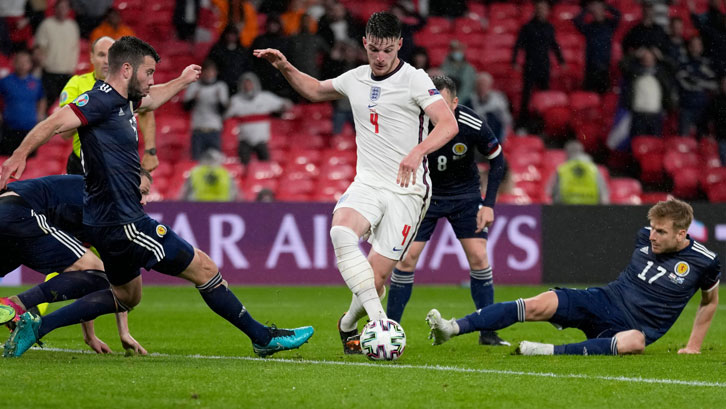 “We work every day on how we want to play and what we want to do, but Scotland nailed their game plan and they nullified Harry Kane, who is a world-class goalscorer. We want to get the ball to him and we want him to score our goals because he’s a top player.

“We need to stay positive and not be too negative and down on ourselves. Now maybe in the press, on social media and with the fans, there might be an overreaction and stuff, but we need to stay focused, get back to the drawing board, analyse and get ready for the Czech Republic game.”