Declan Rice has been studying videos of Premier League legends as he bids to become an even greater superstar.

Arsenal’s former star Patrick Viera and Manchester City’s Yaya Toure have been on his must watch list as he aims to improve his game all over the park.

It’s been very clear from recent games that the Hammers captain has been getting forward far more over recent games.

And it was particularly noticeable last night against Leeds when he tried his luck with a number of shots as the Irons beat Leeds 2-0.

Rice told Sky Sports: ‘I think a lot of people see me as a simple, basic player who gets it, gives it and protects the back four.

‘I know, my team-mates know and the manager knows what I’ve got in my locker.

‘I want to show that I can be exciting and I can take the ball forward. I have great athleticism.’

They are certainly qualities shared with Arsenal and France legend Vieira, who was the leader of Arsene Wenger’s great sides at the turn of the century.

Both Toure and Viera were noted for their box to box games as they became huge players in their clubs midfields.

And Declan is trying to see what it was they had and how he can develop the same attitude in his game saying: ‘I’ve been watching the top players over the years, the Yaya Toures, the Vieiras,’ 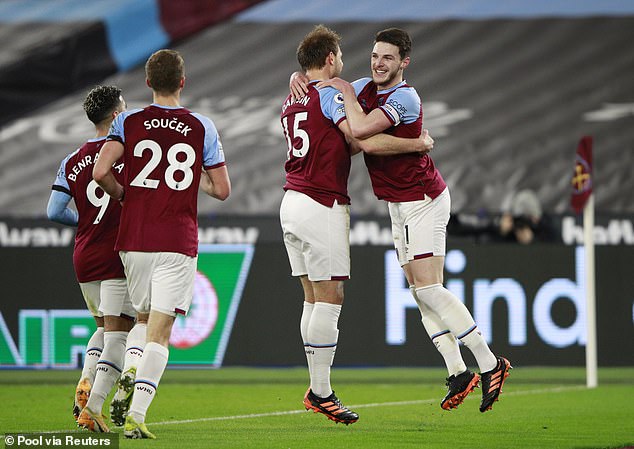 ‘There’s a long way to go to get to that level. But the way they used to carry the ball up the pitch and drive their teams forward is something I have been trying to learn and add to my game.”