Dec’s Hammers future on the line 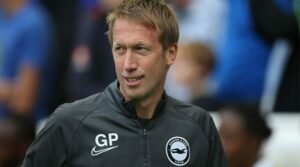 Graham Potter may see Declan as a target

Declan Rice’s future as a Hammer is more under question now than at any time in the last two years.

The near non-stop saga on whether he will stay or go has preoccupied us for a long while but as exclusively revealed in CandH several months ago he was always going to remain for the 22/23 season.

However, it bears repeating that the club are ready to entertain offers next summer after seeing his representative – Sean Rice, and the player as a result – reject an offer of £200k a week.

A key source explained to us then that he would definitely be here this season but that a decision on his future would be made in the summer were offers to arrive.

It remains to be seen whether new Chelsea boss Graham Potter sees him as a player he needs or whether the Hammers get the widely reported £100 million plus for which they are hoping should a bid arrive.

This season’s results will have done nothing to help change the circumstances surrounding our prize asset and we can only hope the squad go on a run which lifts them into a position where that may be the case.

2 comments on “Dec’s Hammers future on the line”