During the summer , when the rumour mill was at full throttle, Angelo Ogbonna’s name was one  frequently in the frame.

Whether it was the usual newspaper gossip columns or the numerous ITK’s on social media, Oggy was favourite to be on his way – or so we were meant to believe.

But while others in the shape of Hernandez and Perez did pack their bags, Oggy’s feet remained firmly under the table and stayed at the London Stadium to fight for his place in the side. 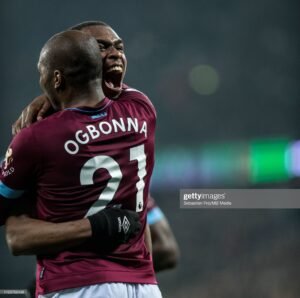 It’s a fight he looks to be winning, turning in a succession of solid performances at the heart of the West Ham defence, and forming a formidable partnership alongside Issa Diop.

Having been brought into the first team following the opening day defeat to Manchester City, Oggy has gone from strength to strength, cementing his place in the side and at the same time keeping Fabian Balbuena, one of last season’s star performers, firmly on the bench.

The General has been a big hit with the Hammer’s faithful since his arrival last season, but such has been Ogbonna’s form this season, his name has regularly featured ahead of Balbuena when fans have been picking their preferred starting 11.

Oggy appears to have rid his game of the occasional lapses in concentration that occurred from time to time. Now he’s playing with more focus and greater confidence.

As a natural left-footer his inclusion has allowed Diop to move to the right side, which is the more natural to him. As a pairing it appears to be looking, and working well.

Oggy has an impressive pedigree. He’s represented Italy at both Under-23 and full international level and was twice a winner of Italy’s Serie A while with Juventus, before joining West Ham in July 2015 in a deal reported to be worth around £8m.

With more than 100 Premier League appearances to his name, he’s one of the most experienced players at the club.  Like fellow defender Aaron Cresswell, Oggy is enjoying a revitalisation this season, and deserves full credit for the way he has remained the perfect professional,never moaning when he was out of the side.

Insteadhe is  buckling down, working hard, and he’s now enjoying the reward his efforts deserve.