Departed Hammer: ‘I learned a lot from Moyes’

The defender departed for Brondby in the January window, having never actually made a first-team appearance for the Irons. 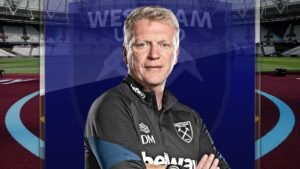 He was signed from Silkeborg IF in January 2021 but he failed to make a breakthrough at the London Stadium and was instead restricted to playing mostly for the U23 team.

Alves did make 12 appearances for them and was loaned to Sunderland, but he again struggled during his time up north and only played nine times for the club.

Now he has moved on, the Denmark U21 international has explained his departure from the Irons and he has confirmed that he found it difficult to accept a move away, while insisting that Moyes is a top coach, having trained with the first-team at times during his time in east London.

Speaking to Ekstra Bladet, as transcribed by Sport Witness, the central defender said: “I learned a lot from Moyes, with whom I had a lot of conversations – and who was an insanely nice and good coach. He was a defender himself, so he taught me a lot about positioning and how to do it.

“In our conversations I was told that I was the best of our centre-backs on the ball. It was cool to be told, but I could also see it on the training ground.”