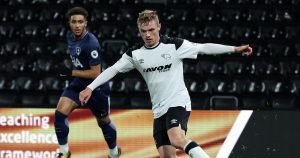 Club insiders have rubbished reports that Derby County’s Luke Thomas is close to becoming Manuel Pellegrini first signing. Reports this afternoon suggested the Hammers have made an offer of £1.2million for the 19-year-old, who was the young player of the year at Pride Park for the 2017/18 season, however, a club source said ‘it was not true what so ever’

He joined the Rams from Cheltenham in January 2016 and the League Two club will receive 15 per cent of any transfer fee received by the Championship side.

Yesterday, Manuel Pellegrini said he needs four to five players to strengthen the squad over the summer.