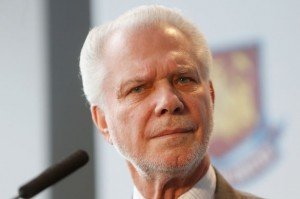 David Gold has used his Twitter account to give his own sardonic verdict on the possibility of Spurs sharing the Olympic Stadium.

The north Londoners have to find a venue to play their games in the 2017/18 season and although MK Dons is favourite some continue to suggest they may want to use the OS.

Spurs of course did their best to prevent us taking over the Olympic Stadium during the bidding stage and the ‘possibiliuty’ looks set to go the same way as Leyton Orient’s.

When asked on Twitter about the chance of rivals Tottenham sharing the stadium with West Ham, @davidgold replied with ‘Don’t bet on it.’