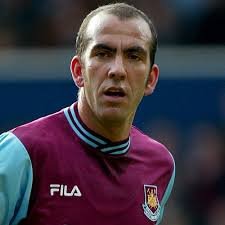 Paolo Di Canio has topped a Claret and Hugh poll of over 700 readers as the greatest West Ham striker in the Premier League era.

The Italian collected over 42% of the available votes with Tony Cottee placed second with 23% of the vote.

Dean Ashton was voted third after being chosen by 15% of those who voted.

Carlos Tevez was next on 7% followed by John Hartson on 3% and Jermain Defoe and Carlton Cole both on 2%.

The loveable West Ham hero accumulated 47 goals in the three-and-a-half years he spent in Claret and Blue.

Paolo’s spellbinding volley against Wimbledon won BBC Goal of the Season and is still regarded as one of the best goals in Premier League history.

Martin Tyler’s famous line of “I do not believe that, that is sensational!” rather sums up what everyone thought of the outstanding strike.

← TV firms likely to veto ‘no relegation’ proposal
Poll: Who is the best Irons defender of the PL years →
Click Here for Comments >