Posted by Sean Whetstone on October 17, 2018 in News, Whispers 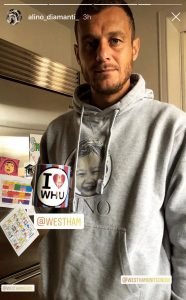 Alessandro Diamanti has shown his love for West Ham in a social media post.

Diamanti was voted runner-up in the club’s Hammer of the Year awards during his only season in 2009/2010 scoring eight goals after a summer move from Livorno in 2009 for a £6m transfer fee.

He was allowed to move back to Italy after just one season claiming he was homesick and was sold to Brescia for a cut down fee. In July 2011, West Ham asked for Diamanti’s registration by the Italian Football Federation to be suspended as they had not yet been paid the latest instalment of the £2million transfer fee.

Italian Serie B side Livorno announced the return of the former Italy attacker earlier this year. Diamanti signed a contract until the end of the 2018-19 season. The 35-year-old shot to prominence with the  Livorno between 2007 and 2009, playing some of the best football of his career as he scored 24 goals in 66 appearances.