Diame ready for some Carroll hell-raising 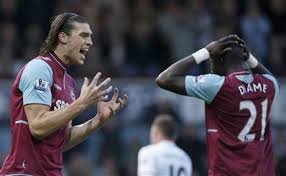 Mo Diame is backing Andy Carroll to create merry hell against his former side this afternoon.

Brendan Rodgers rampant Liverpool arrive at The Boleyn looking to go back to the top of the Premier League pile but the Irons midfielder reckons AC is ready to take it out on the team that allowed him to leave.

He said: “When you’re a good player like he is, you should not be leaving a club like Liverpool.

“Of course, we’re not Liverpool — and Andy is not Luis Suarez. But we’re a good team, who play differently to them. Andy is one of the best strikers in the Premier League.

“He’s important to us. You come up in this league against strong defenders like Branislav Ivanovic and Vincent Kompany.

“But with Andy in the team he makes a big difference for us.

“When we put the ball in the air, Andy is there to put it down and we just make sure we’re there for the second ball.

“He’s very good for the midfielders because you always know where the ball is going to be.

“I certainly would not want to be playing against him today.”

Diame, 26, believes Carroll must go to the World Cup if England are to give themselves a powerful option.

He added:  “Andy’s a very different striker and, at a World Cup, there will be games when you need someone like him. You can call on him when someone like Daniel Sturridge isn’t able to take the ball in the air.

“Against strong teams, it’s better to have him than not.”