Diangana decision may need to be made 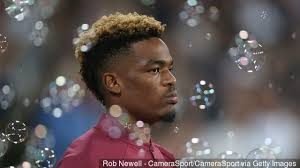 Josh Cullen’s return to West Ham is less likely than that of Grady Diangana’s who is enjoying a brilliant season on loan at West Bromwich Albion.

Diangana has turned in some outstanding performances in midfield this season for the Baggies, scoring four goals along the way with a handful of assists thrown in.

And should the indifferent form of such as Fornals, Lanzini, Snodgrass and Wilshere continue, the manager could face a big decision as the winter transfer window approaches.

Although Michail Antonio is likely to be back by then – and his energy, pace and power may be another reason behind the team’s decline – Diangana’s situation is one which will command a lot of attention.

Frankly, it would be tough on the boy who could easily be in line for a Championship medal as things stand right now but  club insiders are already suggesting a move back home could be on.

ClaretandHugh was told by a senior source on e mail: “There is a two week window between January 1 and 14th when we can do so – it will be a managerial decision. It’s always a possibility.”

← Pellegrini may ring changes but even that looks a problem
Poll: What next for Nathan Holland? →
Click Here for Comments >

3 comments on “Diangana decision may need to be made”