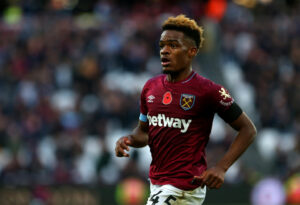 West Ham have no current plans to suggest that Nathan Holland swaps places with Grady Diangana at West Brom in January.

A suggestion that such a deal could be on was rumoured yesterday but a top level source at the Hammers told ClaretandHugh this morning by e mail: “That’s a new one on us.

“Grady was the player wanted by Slaven and it suited us, them and the boy.

He added: “The attraction was that Grady had PL experience  whilst Nathan has none at this stage.”

A clause exists in the arrangement that the Hammers can recall Grady between January 1-14 but absolutely no decision has been made on that at all.

CandH was told: “With the number of midfielders available at the club it would seem on balance the player is more likely to stay where he is but things can change quickly so we will have to wait until closer to the time.

The deal was for a season and the clause is a precautionary measure in case of emergencies.”

2 comments on “Diangana ‘more likely’ to stay at Baggies”