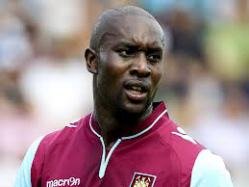 I’ve got a nose bleed and want some oxygen up here in fourth place – this is as good as it gets. Astonishing stuff !

Sam Allardyce came back to Burnley – his one time deadliest enemy when manager at nearby Blackburn – with the best West Ham squad in many a long year.

Not that it looked that way in the first half as The Clarets tore at us taking us by surprise and ending the first 45 minutes having taken 65 per cent of then possession. They could have gone in at least a couple of goals up.

But when it’s for you it’s for you and the Irons came out for the second half with that man Diafra Sakho, Enner Valencia and on his appearance as sub, Carlton Cole  thriving alongside the Senegal international.

Carlton looked a player and a half scoring one and having another cleared off the line. Make no mistake, these two guys can play together.

And immediately after the game there was a Twitter campaign underway to get Coley the man of the match award – yeah it was that good.

He came very close but for me the top award went to Aaron Cresswell who was pure quality all afternoon but Sakho was right in there pitching for the top award again.

Quite why we saw Kevin Nolan I’m not sure and his contribution was minimal but that’s not even a tiny moan really. This was not an afternoon to start whinging.

To go into the top four on the eve of your 60th birthday ahead of night out with mates will do for Sam. The performance did for everyone of us Hammers,