Do go to bed! Ajeti is not signing just yet…. 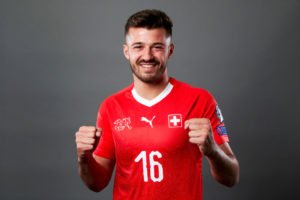 Swiss striker Albian Ajeti will not be signing tonight so in the words of West Ham Chairman David Gold, You can go to bed!

Ajeti is expected to put pen to paper on his West Ham contract on transfer deadline day after completing a medical today.

The 22-year-old was left out of Basel’s Champions League 3rd qualifying round game this evening against Lask although he was doubtful to play anyway as he had been injured for the last two games.

A club insider speaking to Claret and Hugh this evening was optimistic saying the deal should be completed tomorrow but was being held up due to Basel staff involvement in the Champions League game tonight preventing important paperwork being completed.

The transfer fee has been set at £8m with a further £3m in add-ons based on Premier League appearances.

When signed Ajeti will become the sixth signing of the summer with a total investment including add-ons of over £85.5m.

4 comments on “Do go to bed! Ajeti is not signing just yet….”