Down to earth Fornals takes budget way back from Spain duty!

Down to earth Pablo Fornals linked up with Spain and played in the UEFA Nations League final over the weekend, and flew back to England on a budget EasyJet flight!

The attacking midfielder was called into the squad as they took on both Italy and France in the tournament. 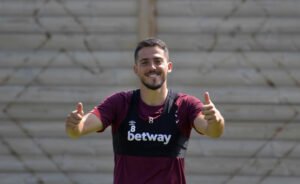 Spain beat Italy 2-1, with Fornals an unused substitute, and were narrowly defeated by France in the final; the Hammer came off the bench late on.

And The Sun reports that the Irons ace did not have a glamorous route back to England, instead catching an EasyJet flight to Luton.

By comparison, both Paul Pogba and Raphael Varane, who play for Manchester United, took a private jet back to Manchester.

Fornals is said to have travelled with his family and was spotted chatting with other passengers before boarding the plane.

The Irons ace has made seven league appearances this season, scoring twice and laying on an assist.