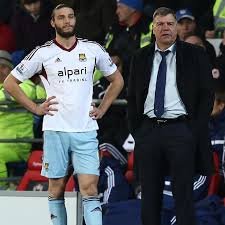 Concerns were arising that the big centre forward was out of the World Cup frame frame after ineffective recent performances but the Hammers winger believes he must have a real chance.

He said: “If he plays like that, he should go with England. He is the one striker in the country who plays the way he does.”

“I think he is a different option for Roy Hodgson,” he said. “If you look at all the strikers for England he is just completely different. He can affect things, make it difficult for defenders.

“I am not saying put him in from the start, but if he comes on he gives you different options, so I would take him personally.

“If you ask the Tottenham defenders, Dawson and Chiriches, they will say he is a huge handful.”