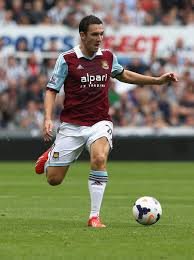 Stewart Downing wants and England call up as he help the Hammers qualify for Europe.

Downing’s form has been outstanding since adopting a more central role and marked Steve Gerrard out of Saturday’s game..

Sam Allardyce is raving about him describing his form as fantastic claiming the move inside has allowed him to really shine.”

And Downing, who last played for England two years ago  he would jump at the chance of an international return saying:  “I’d love to play. Love to.

“I’ve always said I have never given up on England, but being realistic I didn’t think I would get picked.

“If I keep playing well I will give him something to think about but if he doesn’t pick me I will just carry on.”