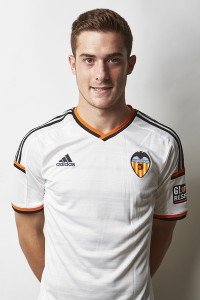 Chairman David Sullivan has confirmed exclusively to ClaretandHugh that Valencia wonder kid Toni Martinez is on his way to the club.

Despite denials last night on social media, David told us a few minutes ago: ” Yes, I can confirm he will sign in the next 7 days.

“There is a large fee if the player is success and a small one of he’s not. He’s one for the future. Hopefully he can be on the fringes of the first team within a year.”

Slaven Bilic poured cold water over social media reports from last night that the player wasn’t on the Hammers radar in his morning press conference ahead of the Crystal Palace match.

ClaretandHugh had reported  last night that  Spanish radio station – Radio Taronja – claimed we were on the the verge of signing the highly-rated youngster, who has notched over 100 goals for the Mestalla youth side over the last four seasons.

Then came the denials on Twitter before Slaven Bilic said in his morning press conference that negotiations were ongoing for the 18 year old.
He said: “We are quite close to capturing Toni Martinez [of Valencia]. All other rumours in the paper are just speculation.”
Soon afterwards ClaretandHugh received confirmation from DS despite the story being roundly rubbished on Twitter last night. CandH had repeated reports from Spain last night claiming the Hammers will pay an initial 1 million Euros which could rise to 3 million Euros on certain performance factors which now corresponds closely to what we have been told.

Martinez has starred in Valencia’s youth teams for the past few years, scoring over 100 goals in four seasons, but it is said he has grown tired over his lack of first-team opportunities. The contract is thought to include a sell on clause.

← Di Canio: “Here’s the next Irons legend”
Payet would not be banned from UK →
Click Here for Comments >