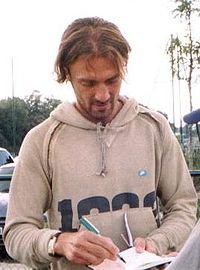 The former Marseilles, Bordeaux and Barcelona striker now has his own radio show on RMC Sport and invited Frank Lebouef and Emmanuel Petit to join him.

Dugarry – who also played 30 games for Birmingham City for a mere six goals – was in no moods to mince his words on the former Manchester Unite defender’s performance and mixed sharp sarcasm with high criticism as his Hammers debut at Anfeld.

He declared: “He was good that game, no? He lost 19 balls, late for everything. I found him very good. Well, I found him at his standard.