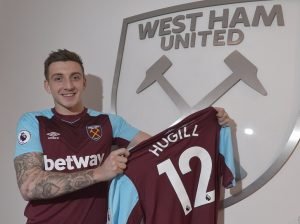 Jordan Hugill is facing a West Ham exit next season if the club maintains its Premier League status.

The Irons  can of course take an enormous step towards that against a depleted Stoke City at the London Stadium tomorrow evening .

The Irons were given a big boost by Chelsea’s victorious three goal comeback at St Mary’s yesterday.

That ensured that despite slipping a place in the league they remain in a relatively healthy 15th position six points clear of third off bottom Saints with games in hand on all those around them.

Hugill, meanwhile, has had little chance of figuring in the first team and ClaretandHugh has learned that he could be on his way to a decent Championship club on loan ONCE the Irons are safe.

He was bought as a striker who could produce immediately in the Championship should the worst scenario develop when things looked grim in the winter.

But the Irons will want a Premier League proven striker come the new season as David Moyes looks to entirely rebuild an inadequate and tired looking squad.