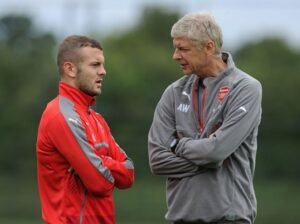 According to Jack Wilshere, he was told to go by Unai Emery soon despite being offered a new deal at Arsenal after Wenger’s departure.

He says he desperately wanted to stay at Arsenal and loves the club but was forced out and felt he had no option but to accept an offer from West Ham.

He told the In Lockdown podcast: “I got offered a new deal and I wasn’t really happy with it, but Arsene was doing everything he could for me.

“We got to a point where I’d almost agreed it then the news came that Arsene was leaving, and I just thought, ‘How can I sign a new deal that is based on appearances with a manager who I don’t know?’

“When Emery came in I wanted to sit down and have a conversation with him, we did and he said, ‘Basically if I were you I would leave – you’re not in my starting XI.’

“He had plans to buy a midfielder, I think he bought [Lucas] Torreira, and I wasn’t in his plans.

“And that was the moment that it felt like the club was going in a different direction and I decided to leave.”

You can listen to the full interview at  https://www.arsenal.com/news/lockdown-jack-wilshere-part-two