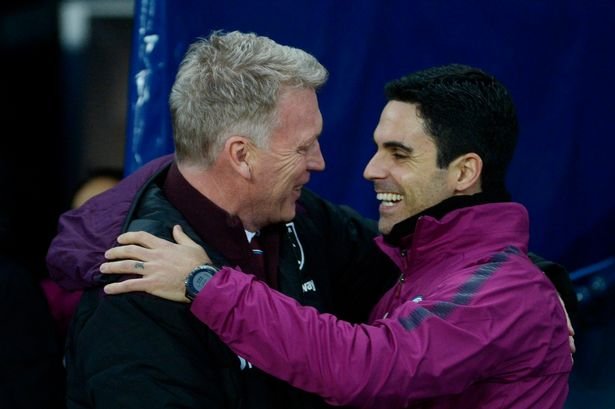 Arsenal boss Mikel Arteta’s hug and handshake with David Moyes during our our last game was the reason the Hammers boss had to go into self isolation.

We all know far better now and Moysie thankfully is fine after his period alone .

But Arteta has spoken about the emotional issues now attached to himself and society at large as a result of the critically important non contact situation across the UK globe.

Sadly the Hammers finished up losers on a day when they really should have beaten the Gooners but it has paled into some insignificance in the light of all that has followed.

And Arteta has now spoken on his own recovery and what he is missing as the pandemic continues to put our lives on hold.

And for those of us who have always been among the touchy feely brigade they will resonate in a big way – for the more introverted they may also strike a chord of a change of ways when this thing finally passes.

Speaking at https://www.bbc.co.uk/sport/football/52057533 Arteta said: “We are in a world here where everything is social media, everything is a WhatsApp text

“I miss that with a lot of the people I love.

“We have to be emotionally more open. We have to tell each other what we are feeling.”

Arteta reported feeling unwell after it was confirmed Evangelos Marinakis – the owner of Greek side Olympiakos, who played Arsenal in the Europa League in February – had coronavirus on 10 March.

On Thursday Arteta said he was feeling “completely recovered” and urged people to follow the government’s advice on staying at home.

“It’s one virus that is putting the world aside and it’s transforming everything that we prioritise in life. So we have to take that lesson,” he told the Arsenal website.

“We cannot just in two or three months’ time – if we are able to get over this quickly – forget about this, because it’s so important.”

Arteta said his main concern was his three children after his wife and their nanny contracted the virus.

Arteta self-isolated in a room and a bathroom for two or three days but his wife fell ill shortly afterwards.

“I am a very positive person and I try to take the moment to say OK, what can we take from this?” he said.

“I haven’t had the opportunity to wake up with my kids and dedicate my time and listen to them.

“We are in the household together and we are really enjoying those moments as well.”

3 comments on “Emotional Arteta speaks out after Moyes contact”