Posted by Sean Whetstone on October 30, 2015 in News, Whispers 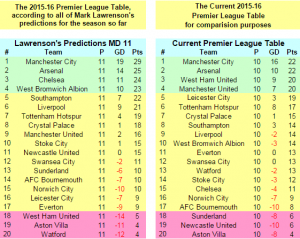 BBC pundit Mark Lawenson is at it again predicting his seventh loss of the season for the Hammers.

“Every time I think Watford are about to get sucked into the relegation fight, they come up with a big result  like last week’s win at Stoke, generally away from home.

West Ham also had an impressive win – yes they were at home but  they were up against Chelsea and had to show great resolve in a game I thought they would lose.

The Hammers have claimed a few scalps on the road this season but I would argue that was as good as any of their previous results. On the face of it, their away form makes them favourites at Vicarage Road but Watford do not look like a side that has just been promoted and they might surprise a few more people this weekend.

After beating the Blues, Hammers boss Slaven Bilic said he had not set up his team as if they were at home and I think the Hornets will do the same. Watford will not be easy to break down and will do what it takes to get a win.  Lawro’s prediction: 2-0″

As the graphic above from www.myfootballfacts.com shows Lawro is way out of touch, West Ham would be in 18th place with 5 points in a relegation scrap if all his woeful predictions had come true this season.