Europe and the “fatigue factor” 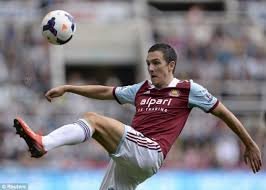 The West Brom game demonstrated perfectly just how fragile a good squad can be when looking at European football.

Let’s make no bones about it, West Ham could be worthy of a top six place. Yes, top six which, if Chelsea win a domestic cup. would qualify the Irons for the Europa League…. assuming of course  we can stand the pace.
However, we’re looking slightly crestfallen after two defeats and a draw when playing an extra game over the holiday period.
However, let us not get overawed by what the Europeans do, or rather, don’t do, it is only ONE extra League game fitted in a week between Boxing and New Year’s Days.
It is a good indicator of what could be to come next season with the pressure of a midweek game each week. We’ve heard a lot nabout the fatigue factor this week – we will need to get used to that or do something about it!
Arguments can be made over forward selections with the African Nations Cupdrawing near and Mauro Zarate being loaned out but  it was the midfield that looked decidedly average against West Brom.
The team was reliant on Song who had poor support. Kouyate looked energetic in winning the ball but laboured in his passing. Amalfitano looked lively but had little movement around him. Downing (pictured) was desperate for colleagues to win him space.
The midfield options on the bench? Jarvis, Nolan & Noble! A struggling Baggies side nullified arguably the strongest Irons line up. The benched players weren’t going to light up the sky over the Boleyn.
The summer, and indeed January, investment is going to be critical for West Ham’s advancement.
Permalink