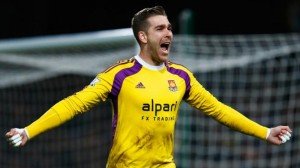 Everton boss Ronald Koeman is reported to have shown interest in a late deadline day swoop for Adrian.

The Liverpool Echo reported that the possibility of signing Adrian in January was discussed by the Toffees but that  the recent orm of Everton number one Joel Robles that persuaded Ronald Koeerton showed late interest in Irons starman to stick with his current crop of ‘keepers until the summer transfer window.

Everton  were also made aware of Adrian’s availabilty but Koeman has been impressed with Robles who has overcome his ‘anger’ at the beginning of the season, when he was demoted to No2 behind new signing Maarten Stekelenburg, to produce some excellent performances and so did not act on their initial talks over Adrian.

← Sakho and the truth behind “Hogan for Hammers”
Slav turned down £100,000 per week defender →
Click Here for Comments >