Evra shows off his Liverpool pain 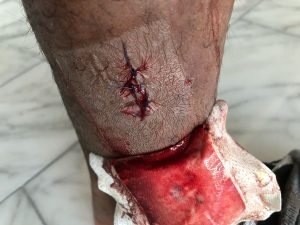 Evra walked away with a gash needing three stitches

Patrice Evra left Anfield on Saturday with a nasty wound which needed three stitches and abuse from the scousers ringing in his ears.

The former Manchester United star last appeared in the Premier League in 2014  and had a stormy welcome back despite probably knowing what was on the way.

But afterwards he shrugged it off declaring only:  “I have missed the game and those tackles.

He added: “”Not a good result but I am very happy to be back in the Premier League.”

He carried a severe gash on his ankle which required stitches after the match,

The Liverpool fans also soured his return b reminding him of the racism row with their former star Luis Suarez.

He was booed as the line-ups were announced and although Evra wore a ‘Kick it out’ T-shirt while warming up it made no difference.

4 comments on “Evra shows off his Liverpool pain”