Ex Hammer calls it a day 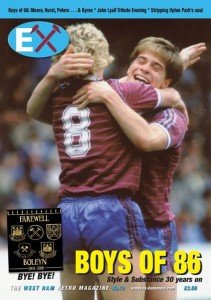 West Ham retro magazine Ex Hammer is to close down after 14 years of publication. The news was announced on Facebook yesterday by Editor/Publisher Tony McDonald.

Tony wrote: “WITH a heavy heart, we reluctantly announce that we have published the final edition of EX magazine.

We can fully understand and appreciate your disappointment but the decision to pull the plug after 79 issues spanning the best part of 14 years was certainly not taken lightly and, without wishing to sound too melodramatic, it followed a lot of soul-searching and careful consideration over a period of many months.

We had hoped that a new publisher could be found to take it on, someone who shares our passion for West Ham United’s history and the men who made it, but none of those we approached – including Hammers supporters with publishing experience – have shown even the slightest interest in picking up the baton.

I don’t believe there is another British club that has sustained a retro magazine dedicated to its past players and management, certainly not for the length of time EX has been produced. So we had a real good go and it’s been a wonderfully nostalgic journey.

To be warmly welcomed into the homes of true West Ham legends – any former Hammer for that matter – has been an absolute privilege and pleasure and I thank them all for their time, co-operation and enthusiasm. A number have become genuine friends and we intend to stay in touch. I can’t think of one ex-player or manager who turned down an interview request. I hope we’ve done them all justice and helped to bring you a greater insight into their experiences and the part, big or small, they played in the club’s evolution.

We don’t want to let down our readers, especially those loyal subscribers who have been with us from day one back in late 2002, but it now feels the right time to call it a day. The club has left Upton Park and is moving on, and so will we.

In truth, what does it really matter? The world will keep turning and we all need to maintain perspective. Just before the last issue went to press, I was much more gutted to read that a lovely old acquaintance from my early Hammers News days in the 80s, Eamonn Dolan, had finally lost his courageous battle with cancer at the age of just 48. Eamonn made only 19 first team appearances as a striker but I will always remember first and foremost for being such a nice bloke.

I was also choked to learn that another ex-Hammer, good friend Joe Durrell, has suffered a massive stroke at 63. Such a bubbly, very likeable Cockney character who still has claret-and-blue in his heart 40 years after he left the club. Many of you will recall his popular special guest appearance at one of our Romford forums a few years back, and I feel sure that you would like to join us in sending prayers and best wishes to Joe’s family in the hope that he makes a full recovery.

If EX has achieved anything, I hope it’s projecting our conviction that the Dolans and Durrells are just as important and valued equally in our hearts as the more celebrated legends and superstars who have represented the ‘West Ham family’ since 1895.

So, I ask you again, what does closing a magazine that comes out just four times a year really matter?

In the meantime, I would also like to thank the editorial and photographic contributors who have been with us at different stages of our journey, especially Terry Connelly, Tim Crane, Terry Roper, Roger Hillier and Neil Humphreys. Also Tony Hogg, our self-styled roving match day seller, who has trawled the streets and pubs of E13 in all weathers to spread the word.

Most of all I thank you, our readers. We are very grateful for all your support. Many of your have written to express your sadness and gratitude and for that we are truly thankful.

← More OS tickets go on sale
It was the greatest day of our lives…we were West Ham, and why weren’t that 11 in claret and blue? →
Click Here for Comments >