Posted by Dave Langton on October 15, 2021 in News, Whispers

Nikola Vlasic is excited to return to Goodison Park and take on former club Everton this weekend.

The Hammers’ summer signing has yet to properly catch fire at the London Stadium since his arrival in the summer transfer window. 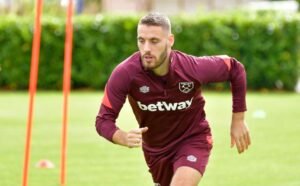 In total, the Croatia international has made six appearances in all competitions but has yet to score a goal or provide an assist.

Still, he is set to be involved this weekend when the Irons take on his former club at Goodison Park.

Vlasic played for the Toffees between 2017 and 2019 but never really managed to make a proper impression on Merseyside.

In total, he played just 19 times for the club, and scored twice, while laying on one assist.

And he is hopeful that the club can deal with the noisy atmosphere at Goodison Park this weekend in order to get back to winning ways.

Speaking to the club’s official website, he said: “I have good memories with Everton, but now I hope I will go there with West Ham and we will win this game. It’s always good memories and a good feeling to play there.

“Goodison Park is a difficult place to go. The fans are really loud, and they are helping their all the game so it’ll be hard for us, but I think all the players here are used to that atmosphere. It’s hard at every away game, so there shouldn’t be any problems with that.”

Vlasic is also aware that the Irons desperately need to take all three points after heading into the international break on the back of the disappointing 2-1 defeat to Brentford.

He added: “After the last game we lost against Brentford, I think we need a good game and to win three points to be back on a good track.

“I’ve really enjoyed my time here so far, but I think I need to get more used to the Club, the players and everything around the city, so I think it’ll be even better in the future.”