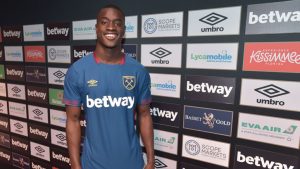 Terry Westley has hailed the arrival of new Potuguese striker  Mesaque Dju to the club.

And he has told www.whufc.com this is a player that has been scouted for some considerable time.

He said: “We had seen Mesaque play for Portugal and win the U17 and U19 European Championship titles. He was an attacking player who was always highlighted when you watched him in those games.

“We always said that, should he become available, he would be of interest to us and due to our extensive networking and recruitment department.

We found out that the opportunity had arisen to sign the player, so we stepped in quickly and secured his signature.

“Mesaque is a wide player who is different to the current young wide players we have in Grady Diangana, Nathan Holland, Martin Samuelsen and Dan Kemp, who are what you would class as a dribblers. He is a dynamic player with great pace and power, a little bit like Michail Antonio.

“He is six-foot plus, two-footed, strong and can deliver with quality from the left or the right, and could even decelop into a number nine with his attributes which could make him a Premier League player.”

ClaretandHugh says: Portugal is becoming quite a fertile country for Hammers youngsters and that the club has swooped before Brexit is significant. For should we leave the EU as is now so much on the cards clubs are going to be unable to sign as many youngsters from Europe as they did previously and thus we are very busy not only in Europe but across the world. We have all come to trust Westley and his staff implicitly given the number of youngsters we are seeing burst into the first team squad and from the description he gives of Fju it looks like another highly exciting prospect will be linking up with his countryman Xande Silva in the under 23s.  We can expect to see Academy staff travelling further and wider as the club prepares for its Brexit departure but in the meantime Dju and Silva look to be hugelyu exciting additions to the Academy.