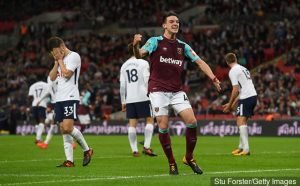 West Ham are planning to hand Declan Rice a “very decent rise in the summer” following his sensational arrival on the first team scene this season.

The 19 year old is contracted to the club until 2020 and the club holds a further 12 month option beyond that but want to secure him on a deal until 2023.

Such has been his impact this term the club are determined to offer him a big new deal as a first team squad player.

However, a source close to the teenager told us: “Of course there are finances to be talked about but that’s not the major issue with Dec.

“He loves it at West Ham and he is far more interested in playing football at the highest level than going elsewhere on more money and not getting near the first team! Money is not his motivation.”

Currently the central defender is on around £2.5k a week and his basic is likely to be renegotiated to £20k with appearance clauses possibly taking him to £40k a week.

However, the club would also review the wage package after the player had made between 30-40 first team appearances with another increase on the cards as it was with Aaron Cresswell and Michail Antonio..