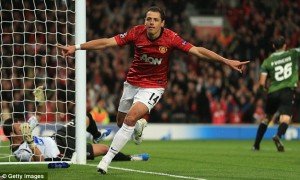 West Ham are in involved in “horrible” negotiations to bring Javier Hernandez to Upton Park.

The club have made the Manchester United striker their No1 transfer target – but the Old Trafford club are forcing negotiators to “go round in circles” as talks stutter on.

The Hammers upped their original £9 million bid by £3m yesterday, but United are refusing to budge on the player, insisting he’s not for sale.

But the Irons, led by Slaven Bilic, believe that if he was a real first-team contender, who would hardly have been an unused sub if he was wearing Claret and Blue (as he was against Spurs on the opening day of the season).

The Irons have been told it may be a different situation if United bring in a couple of strikers, but in the meantime he’s off limits.

ClaretandHugh was told exclusively by a highly placed course: “We are going around in circles with them. They say they won’t sell him but then discuss the offer.

“We intend to keep trying as he’s a big target for us. But at he moment we are going around in circles and, to be honest, it’s horrible.”