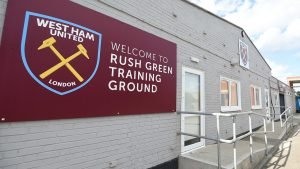 And the same will go for every other Premier League club who are currently waiting for a further government statement on June 1.

As things stand games are hoped to start again on June 12 with  Uefa having given a final date of August 2 for Leagues to be completed.

A well placed Hammers insider made it clear that every player has been given a personal plan but that they – like all others squads – could be well short of match fitness.

He told ClaretandHugh on the ‘phone: “The lads are  keeping themselves in the best shape possible in these circumstances but if we get the go ahead to play from June 12, then only training games games possible will be against the under 23s.”

Manager David Moyes has claimed the players will need a month to prepare for the final games should they go ahead but it looks improbable he will get more than a fortnight as things stand.

Much will depend on whether Uefa are ready to adjust the to timetable to give clubs a chance to play a series of matches but as things stand we could see behind closed doors between teams only up to 75 or 80 per cent fit.

← Poll: Which German club will you adopt on Saturday?
Alternative rollback models could sink or save the Hammers →
Click Here for Comments >

One comment on “Exclusive: Irons squad set to face problems”