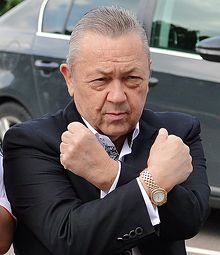 David Sullivan has denied rumours that he is involved in a takeover bid for for Serie A side Hellas Verona..

Several Italian outlets including L’Arena are reporting the Hammers co chairman took a two-day visit to Verona over the summer with the purpose of the trip to taking over the club as they look to land the new Arena Stadium.

According to L’Arena Sullivan spoke positively when questioned during his visit declaring: “Verona is a beautiful city and the fans of Hellas are as hot and passionate as the English.”

However, the co chairman has revealed that the entire report is fiction in an exclusive comment to ClaretandHugh declaring: There’s not even 1% truth in it.

“I have not been to Verona in my life and not been to Italy for years. You wonder where these stories come from !

I normally no longer speak to the media as I know supporters prefer that, BUT as this report might have worried some I have decided to clarify the situation by speaking exclusively with CandH.”

Verona looks an interesting proposition for SOMEBODY, but not me !”