David Sullivan has hailed the amazing Hammers after their astonishing victory over Spurs last night in which every player emerged a hero.

The 1-0 victory is probably the sweetest of the season given that it stopped a title charge by the deadly enemy and showed the team at their attacking best and most defensively resilient.

Sullivan was thrilled with 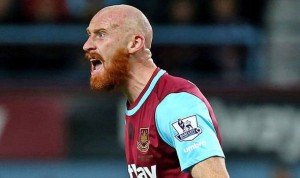 the victory declaring exclusively to ClaretandHugh: “It was a fantastic night and a fantastic performance by every player.

“Now we have 11 Cup Finals to go this season – and hopefully two more if we beat Manchester United.”

The co-chairman also confirmed that the only bad news was the Jams Collins injury which will rule him out of first team action for the next four weeks.

But Angelo Ogbonna looks to be okay after a heroic second half performance after receiving an accidental ‘stamp’ during the first half.

Sullivan told ClaretandHugh: “Hopefully, he is okay but Collins is likely to be out for three or four weeks.”

← Spurs review video blog
DG: “This was the sweetest yet” →
Click Here for Comments >