Posted by Sean Whetstone on December 2, 2019 in News 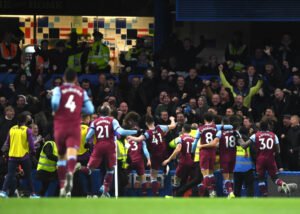 Anti-discrimination charity Kick It Out has called on the Football Association to investigate alleged homophobic chanting by West Ham fans at Chelsea.  The organisation says it has received numerous reports of chanting directed at Chelsea fans at Stamford Bridge.

It is understood the FA is aware of the allegations and discussions with relevant authorities are ongoing.

A Chelsea spokesman said: “Just as we criticise our own supporters when they have been guilty of discriminatory behaviour, we expect other clubs to stand up, speak out and do the same.”

In a statement, West Ham said: “West Ham United in no way condones any behaviour that falls short of the highest standards which the club sets when it comes to equality.

“At London Stadium against Arsenal on Monday night we will be celebrating and demonstrating the great work the club does to create a welcoming and inclusive environment for ALL supporters, including our LGBT+ fanbase, as part of our ongoing and unwavering support for the Rainbow Laces campaign.”

One comment on “FA asked to investigate West Ham”