Lukasz Fabianski insists that the Hammers are not panicking despite losing their first two games of the Premier League season.

The Hammers were beaten by Nottingham Forest at the weekend, a result that came off the back of their opening day defeat to Manchester City. 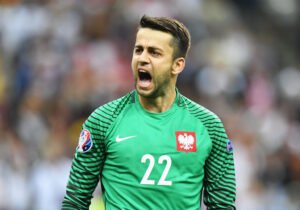 It leaves the Irons in the bottom three, although one has to say that the Hammers had chances to beat the newly-promoted side on Sunday.

Declan Rice missed a penalty, while there were also two occasions in which the Hammers hit the crossbar; another shot was cleared off the line.

The Hammers also had a goal disallowed due to VAR, after Mikey Antonio was adjudged to have committed a foul in the build-up to Said Benrahma’s finish.

And Fabianski insists the Hammers are not about to panic ahead of a busy week that sees them take on Viborg in the Europa Conference League play-offs before playing Brighton on Sunday.

Per the Evening Standard, he said: “No, no, never, never.

“Obviously you don’t want to start with defeats, but then I think it creates this environment of us really making sure that in the next game we are going to turn it around, we are going to get a result. Like I said, the Premier League is not really an easy league! You really have to fight hard for every point.

“But I think sometimes games like this they are, I wouldn’t say a wake-up call, but a reminder that you need to push a little bit more to get the results.”