Fabianski is crucial for Irons success 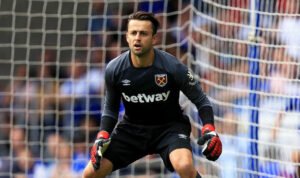 Hammer of the year Lukasz Fabiansli could well be proving the vital miss for the Hammers this season.

Roberto’s shot stopping abilities may be okay but the team’sconfence has leaked away since the Polih international was so horribly injured at Bournemouth.

Since then we have conceded eight goals in just four matches since then – it seems to be twlling its own story.

Hammer of the season Fabianski made the most saves in the Premier League last season  finishing clear of Cardiff City’s Neil Etheridge and Watford’s Ben Foster in the process.

Summer signing Roberto has found himself in between the sticks during Fabianski’s absence and has done little to cnvince any of us he has was it takes to cut it in the English top-flight.

With Fabianski not expected to return to fitness until the new year, it perhaps comes as little surprise that the Irons are the underdogs for victory in their next three matches in the betting markets with Bet365.

The popular bookmaker has Pellegrini’s side priced at 2/1 to pick up all three points at Turf Moor on Saturday afternoon, in what would be their first victory since defeating Manchester United in September. Those looking to place a bet on the Hammers ahead of kick-off can do so on the highly appraised bet365 betting app.

It remains to be seen as to whether Pellegrini will stick with Roberto for their upcoming matches, with many fans calling for 33-year-old David Martin to be given an opportunity. So far he hasn’t made an appearance following his move from Millwall.

West Ham supporters will have undoubtedly hoped that the injury to Fabianski was not as serious as first feared. However with the team having decided for the goalkeeper to undergo surgery, it seems like another showing in 2019 is unlikely.

One former Hammers favourite hoping for the swift return of Fabianski is Kevin Nolan, with the former player remarking on twitter that the side is significantly worse off without their No.1.

Roberto’s poor form began way back during pre-season, with recent goals conceded at the hands of Jonjo Shelvey and Lys Mousset having demonstrated just why fans are frustrated.

Potential replacement Martin certainly has more experience in the English game, despite having never played in the Premier League, which may tempt the manager into making the switch.

West Ham’s run of poor form has seen them slip to 13th in the Premier League table, with just three wins from their opening 11 matches of the season.

Having finished 10th last season, the arrival of the likes of Sebastian Haller and Pablo Fornals were sanctioned in the hope of an improvement upon this position.

But  the Hammers’ inconsistency means that this looks unlikely at this point. However, with Pellegrini and Co often raising their game on the big occasions, fixtures against Spurs and Chelsea could be exactly what is needed.