Posted by Sean Whetstone on September 16, 2016 in News, Whispers 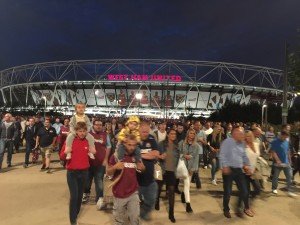 It appears the mystery of the West Ham family seating area has finally been solved – well sort of!

Earlier this week the Guardian said: “A West Ham spokesman said the London Stadium did have a family section, with two blocks reserved in the Bobby Moore stand, and thus complied with Premier League guidelines.”

The Premier League handbook Rule R7 states “Each Club shall provide an area of its Stadium for the exclusive use of family group and junior supporters.”

Since West Ham won the deal to move to the former Olympic Stadium supporters have been asking whether the London Stadium would have a family stand like the old Sir Trevor Brooking upper but the club has never given a straight forward answer to that question.

But the location of the section remained a mystery for many and advisors at the reservation centre often claimed the whole stadium was family friendly so a family section was not required.

Claret and Hugh spoke a senior source within the club to clear the matter up.  “The family section exists in the Bobby Moore Upper”

We were told “If supporters were not offered it it would be for one of two reasons, either (i) they were not in the right band (and we were reserving it for supporters who sat in the equivalent area at the boleyn or (ii) it was sold out by the time they had their appointment. In both cases supporters would have been told that the whole stadium was family friendly”

But the source did concede it was not a dedicated and segregated area adding “It’s not a stand but is an area for families – so operates in exactly the same way as Upton Park other than its not structurally as segregated.”

One of these Bobby Moore Upper Sections is thought to be Block 249 and possibly block 250 next door.