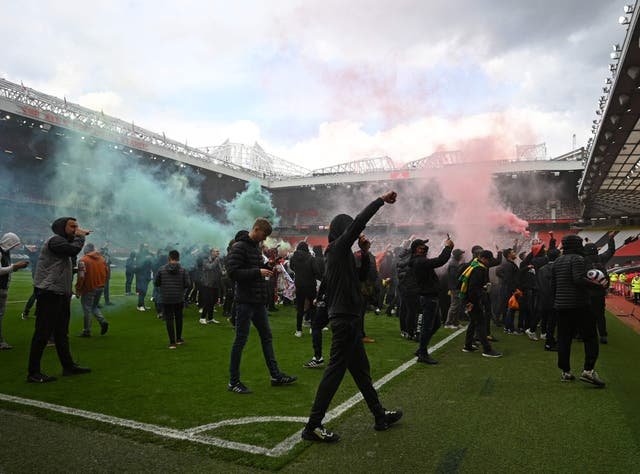 The Government has said it “cannot condone” fans behaviour at Old Trafford on Sunday, but recognised the “frustrations” with football club owners.

The Premier League match between Manchester United and Liverpool was postponed after hundreds if fans dramatically broke into Old Trafford and invaded the pitch in a protest against the Glazer family.

Foreign Office minister James Cleverly on Monday said that while he “cannot condone” the ugly scenes it was important to recognise the importance of fans to the game. “Looking at the scenes that we have just seen on the programme, there can’t be an excuse for that kind of behaviour,” he told Sky News.

“I think it’s really important that we understand the importance of fans to the game, that’s why I’m very pleased that my friend and colleague Tracey Crouch has been appointed by the Prime Minister to lead the fan-led review, because fans have to be at the heart of this game.

“So I cannot condone the images that we have seen about storming the ground, but we do need to understand the frustrations that fans have, not just with Manchester United but with a number of clubs across the game.”

Last week the Government announced a review will be wide-ranging in nature and will examine the potential for changes to ownership models, governance, how finance flows through the game and how to give supporters a greater say in the running of the beautiful game.

The launch of the fan-led review comes following a number of high profile collapses in recent years including Bury Football Club that went into administration last year after being expelled from the Football League in 2019. It also comes after six of the game’s leading clubs moved to initially support a proposed European Super League which was roundly condemned by supporters, the Football Association, the Premier League, UEFA and the Government.

The review will seek to make recommendations on how the governance of the game can be improved, putting fans’ interest and experiences first. The review will engage with groups across the country to hear views of fans and what they think needs changing in football governance.

The Terms of Reference will look at the existing Ownership and Directors’ tests and whether they are fit for purpose and if there is further scope to extend the criteria. While foreign ownership has undoubtedly benefited the development of the game, the review will seek to test whether existing oversight is sufficient to protect the interests of the game.

In addition, the review will assess the need for an independent football regulator, charged with implementing regulation and compliance, and how that might work within the existing framework provided by the Football Association, Premier League and English Football League. It will also look at ownership models, including but not limited to the fan-owned model in Germany, and examine the merits of these.

The review will add to the recommendations of the English Football League’s Governance Review and the Government’s 2016 Expert Working Group on Football Supporter Ownership and Engagement. It will also look at football governance around the world and how models of ownership and dialogue structures can be integrated into the game to improve the fan experience.

The review will seek to: