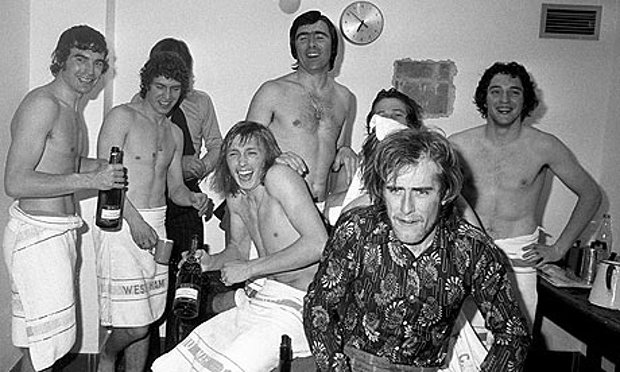 With the Hammers visiting Liverpool this weekend in The F.A Cup, we look back to another great cup victory in our history.

This photo is from inside the dressing room is at Stamford Bridge after the replay victory over Ipswich Town in the semi final with two goal hero  21 year old Alan Taylor  centre of attention.

The smiling Bobby Gould is on Taylor’s Shoulder and though he played in both semi-final games, sadly  he missed out on appearing in the Final Itself. To Bobby’s left looks like the forehead of Billy Jennings, who would have been a relieved man as his dreadful own goal from a corner had cancelled out Taylor’s first to equalise to the Tractor Boys.

John McDowell is far right and Trevor Brooking and Patsy Holland on the left.

The player obscured by Holland remain a mystery at the moment to me. There are  players from the game not listed -Billy Bonds, Kevin Lock, Mervyn Day, Frank Lampard and Tommy Taylor.

Little did anyone in football realise but that team would be the last ever all English team to win the FA Cup. As modern football progresses it looks like an honour that will never be lost.