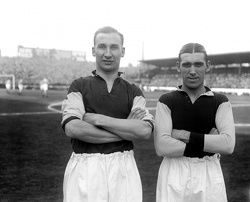 Two players steeped in Hammers history and one with links to this weekends opponents Watford.
Ted Fenton on the left is well known as the man that did the groundwork for the modern day West Ham United as manager during the 50’s but it is Len Gouldon on the right that has the Watford links.
Len was Born in Hackney but lived in the Plaistow area, joined the club in the early 30’s and was once described by Hammers goal keeping legend Ernie Gregory as the greatest player he had ever seen wear the shirt, which when you consider Ernie was at the club for 50 years as player and coach is some accolade.
A winger whose talent was also recognised by his country as Len would win 14 caps for England at a time when the Hammers were in the second tier of English football.
The war would disrupt his career but he continued to turn out for the Hammers, but in 1945 when football resumed, Len would finish his career with Chelsea, finally retiring in 1950.
He moved into management in 1952 with Watford, leaving them to coach abroad before returning in the late 50’s as coach as they won the Division 4 title in 1960.
Len’s last years were spent back in Plaistow where he lived just a five minute walk from the ground he graced, sadly not in the best of health but a great character.I had the pleasure of living directly across the road to Len in his latter years and was in awe of this man and the tales of his career.

One comment on “Farewell Boleyn: Ted and Len – our golden greats”